Sine this is a blog about habits and tradition in Norway, I will tell you about something very unique (Ok, besides in Denmark then). We don’t have the prom tradition, but that does not mean high school graduations aren’t celebrated. The Russ festivities officially take place from April 25 and climax on May 17, Norway’s Constitution Day. Graduating students, clad in red or blue overalls depending on their line of study, tend to spend this time in a non-stop debauch that sparks debate virtually. Each year, as a new year of russ hits the streets of Norway with the intention to celebrate longer, better and louder than the russ of the previous year, the debate over “how out of control the russ of this year is, compared to the good old days” resurfaces with them. 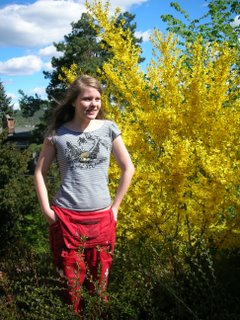 My niece is Russ this year!

The tradition goes back to the 1700s, at a time when no universities existed in Norway, and Norwegians would attend the University of Copenhagen to study alongside Danish students. To be enrolled at the university, students had to pass the Examen Artium. After completing their examinations, horns were placed on their foreheads and they were ridiculed by older students. When the results from the exams were ready, the students would participate in a ceremony called Examen Depositiones, in which they were called up to the examinator: if they had passed the test, their horns would be removed, as a sign of wisdom and subjugation of the wild animal within. From then on, the young persons had the right to call themselves students. 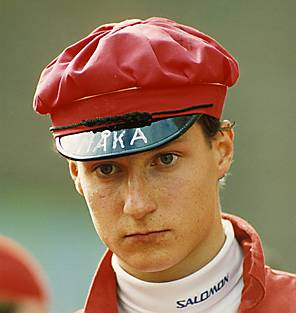 Our Crown Prince Haakon was a russ too of course!
PHOTO: SCANPIX

The modern Norwegian russ tradition dates back to 1905, when the red russ caps were introduced. The caps were initially only used by boys, and were inspired by German students, who in 1904 wore red caps when they visited Norway. In 1916, blue caps were introduced at the Oslo Handelsgymnasium, a high school specializing in economics. One Russ tradition includes knots dangling from their caps, earned by executing outrageous acts of some sort witnessed by their peers. Most of the 101 knot-earning challenges is relatively innocent, if inane. It could be spending the night in a tree, eating breakfast in a traffic turn, reading pornography in public, kissing a policeman or biting a freshman in the leg.

Russ buses (Russebil)
In the older days russ often travelled around in an open lorry, either used as-is or with a do-it-yourself hut added to the cargo area. Today it is common for several friends to join together to buy a russ car (mostly small cities and densely populated areas), or a bus (mostly in Oslo and the surrounding areas), painted in their respective russ colour. 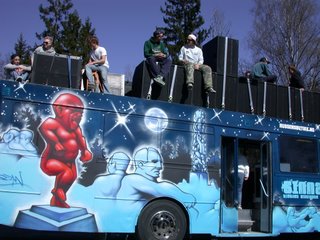 My youngest son’s bus was named Sinnataggen (The famous ‘angry boy’) basted on the theme from Vigeland Park.

In the russ vehicle, modern tradition requires an expensive stereo both on the roof and inside the vehicle (the largest systems allowed can have forty speakers which can generate over sixty thousand watts), bus sweaters, bus lighters/key strings, bus caps and a bus song. It is also common to have some sort of theme for the interior and name/concept. 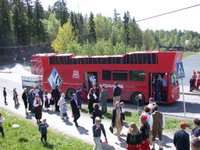 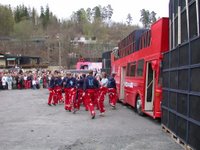 My oldest son’s bus was named Mirage and they won the ‘best music bus of the year’ award! In the picture on the right side, you see the speakers aranged on both side of the bus for a consert.

Russ cards (Russekort)
Most russ have personalized calling cards featuring their name, their photograph and a short slogan. These cards are swapped with other russ and handed out to children or family members; for many children, collecting huge amounts of russ cards is an important activity on May 17.

If you don’t remember the Vigeland Park – the theme of my youngest son’s bus, check my posts from the park by clicking here and here!

17th of May - Norwegian Constitution Day