May is a lovely month – most Norwegians believe it’s the most beautiful: Never is the grass greener, the tulips bloom and beautiful lilacs spread their intoxicating scent. May is the month of plenty of holidays and nearly summer. It is the month to buy new shoes, summer dresses and ironing the flag. May is the month for confirmations, ice cream, summer parties and garden parties on the green lawns surrounded by flowers. It is the month to find the grill and take the year’s first swim in the ocean – the craziest of us have a tradition of swimming before May 1st, but most expect the first swim to be well into May. Anyway, while waiting for the water to get warm enough you can live it up with a blanket and basket in the park or at the beach.

Writing a blog about Norway; our history, traditions and habits, I have made plenty of posts to illustrate and explain all about this. So in this post, I have decided to sum it all up and give you it all – chronologically in a nutshell – about May traditions in Norway:

May is Norway’s own month

May means exams for many and of course we have to work a bit too. For some its graduation and then the Russ celebration is on (see below). Actually, Norway in May is the month of red, white and blue, marching bands and national anthems. We’ve got three anniversaries: 8 May is the Liberation Day 1945, 17th of May our Constitution Day 1814 and then June 7 Union Resolution (from Sweden) 1905 – everybody has his way connected with liberation. Adding to that, we have the Labour Day – of course at the 1st of May. All these days have the status of public Flag Day.

Every year different Unions or local chapters of the Federation in Norway arrange the 1st of May parade. Labor Day was first celebrated in Norway in 1890. Since 1947, 1st May has been a public holiday. In most places in Norway, like in Oslo, the host for the demonstration parade is LO (The Norwegian Confederation of Trade Unions); decidedly the largest and most influential workers’ organization. It all starts with speaches at Youngstorget (The Labor Square).
You might like to read about one of my 1st of May experience meeting our prime minister some years ago by clicking here!

8 May – Liberation Day 1945:
8 May 1945, Germany surrendered unconditionally and the Second World War ended in Europe. Norway was again a free country and never has there been such a party. The freedom party that started on May 8 lasted a whole month and reached its peak by King Haakon’s return to Oslo on June 7.

May 17th – National or Constitutional Day

17th of May is Norway’s national day. Across the country there are parades with school children -celebrating signing of the Norwegian Constitution at Eidsvoll in 1814 – with flags, bunad (national clothing), marching bands, ice cream and is one of this country’s happiest days.
Our famous writer Bjørnstjerne Bjørnson was also a pioneer when it came 17th. In 1870 he organized the first children’s parade in Christiania it went from Akershus Fortress past Parliament and ended up at the Royal Castle. The parade consisted of approximately 1,200 boys and in 1889 also the girls were in the parade. The idea of the parade belonged to the school principal P. Quam who in 1869 conducted a parade of children from their school. Since 17 May 1906, the Norwegian royal family has stood on the palace balcony and greeted Oslo schools’ pupils, except in 1910 when King Edward VIII, Queen Maud’s father, was buried, and during the war years 1940-1945. Reed all about these tradition and celebrations on my posts by clicking here!

The revelling Norwegian Russ in May:

The tradition goes back to the 1700s, at a time when no universities existed in Norway, and Norwegians would attend the University of Copenhagen to study alongside Danish students. To be enrolled at the university, students had to pass the Examine Artium.
The modern Norwegian russ tradition dates back to 1905, when the red russ caps were introduced. The caps were initially only used by boys, and were inspired by German students, who in 1904 wore red caps when they visited Norway. In 1916, blue caps were introduced at the Oslo Handelsgymnasium, a high school specializing in economics.
In the russ vehicle, modern tradition requires an expensive stereo both on the roof and inside the vehicle (the largest systems allowed can have forty speakers which can generate over sixty thousand watts), bus sweaters, bus lighters/key strings, bus caps and a bus song.
Read all about this russ traditions by clicking here! 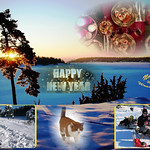 Celebrating the New Year’s Eve in Scandinavia is traditionally a blast of a feast. No wonder as it is the darkest and often the coldest time of the year and since ten thousand years back there was a good reason to celebrate the return of the sun – Winter Solstice festivals is a part of it of course. All this sets the scene for enthusiasm and cheer and welcoming a new year.

Preparing the evening’s celebration starts days before and the most exciting part is buying the fireworks. Shooting up your own is much more fun and you’re welcome to read the story in my last post: Buy and shoot up your own New Years Fireworks. Then of course shopping what’s needed for our traditional seafood dinner; Shrimp, lobster (and sometimes crawfish) served with champagne. You’re all welcome to join us shopping and then sit in and enjoy the firework show this year – all included in this video:

Actually, this is one of the habits and seasonal traditions I’ve posted the most about on this blog, so let me share some of the others by reposting some of the pics in the video with link to these posts: 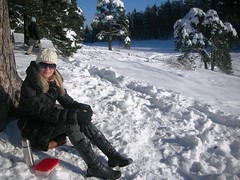 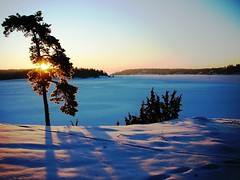 From all of me to All of You: Godt Nytt År!

Dona Nobis Pacem, a Latin phrase, means “Give Us Peace” or “offering us peace”. Again this year, I take the opportunity to join Blog Blast for Peace with my saying: ‘Make Blogs not Wars’. As I strongly believe that Social Media empowers people, I want to give my share:

So what has Peace to do with Blogging? To me it’s simple:
Blogging….: to quote myself again: ‘….. Connecting people’, as we in Blogsphere share our daily life, our thoughts, ideas and experiences – from our own perspective – from our part of the world. We share knowledge and by that we are breaking down cultural, religious and other barriers.

The Peace Globe Project began in the fall of 2006 with a simple post. The post ignited a flame in the blogosphere – The flame became a passion – The passion became a movement – and I want to be a Passionate Participant! Today of course, you’ll find it at Facebook Too!

I have never experienced anything as effective in connecting people across the world as blogging. I have been writing RennyBA’s Terella for almost 8 years now and have met many amazing people and I myself am more aware of happenings across the world today because of the friends I have made in the blogsphere… and I am old enough to know when something is revolutionizing the globe – I am 61 years old today. Blogging for Peace; what a good way to celebrate! 17th of May, Norway’s National and Constitution Day (signed in 1814), is celebrated as the most Norwegian there is. Nationalism, patriotism and childlike enthusiasm are shown, as we celebrate our freedom (after the occupation during World War 2 and 100 years of union with Sweden) and of course the signing of our Constitution.
Adding to that, for a nation located at The Arctic Circle – after a long, dark and cold winter – we are celebrating spring! Special also, and we are damn proud of it: The children are in the center of the activities and the parades are free of military presence of any sort.

I wonder: How do you celbrate the constitutional day in you’re country – or have you been in Norway at the 17th of May – for a comparison? Please share in comments!

February 10, 2013 marks the beginning of the Chinese Year of the Snake. I’ve decided to get off to a fortunate start this year by sending out Chinese New Year post to all Asian and Chinese friends. So “恭喜發財” (gung hay fat choy) or “恭喜发财” (gong xi fa cai) to you all! I do it since my blog is about cultures, traditions and habits – mostly Norwegians of course – and over the years I’ve got plenty of friends all over the world and learned a lot about others. By sharing mine, the comments to my posts and links to others in Blogsphere have been an example to me as a network enthusiast: A Givers Gain! These years of blogging have increased my social awareness and also curiosity to listen and learn as I have had the chance to experience some Chinese culture adventures in Norway too. It’s summed up in a collage I’ve made tonight:

We were invited to the opening of the Chinese painting exhibition by Frank Woo in Lillestrøm (1/2 hour drive north east of Oslo). Frank is my wife Diane’s best friend’s brother. Impressed by his personality and fabulous work, I gladly shared this art adventure with you (and repeat it in this post):
Born in Hong Kong, Frank Woo’s artwork shows an inspirational blending of traditional Chinese colours and textures mingled with modern art and raw emotion. He is a self-taught painter, trained in print-making in Hong Kong. His travels and burning desire for inspiration brought him to Japan, to Tokyo’s Bunka Fashion College to complete his Degree in Illustration. We’ve had special visitors from Xinjang, China in 2007 as part of the Chinese Cultural week giving a breath taking performance in Oslo Concert Hall. Before the show a Chinese friend of mine, Cong, invited my wife and I, plus four others to dinner. I love Chinese food as it is very different and very tasty, although a bit spicier than Norwegian food. The restaurant has a nice Chinese ambiance and the setting puts us into the right mood for the evening.
Talking about my friend Cong and what I have achieved by sharing experiences and culture: Among a lot she is a lecturer and writer on Chinese Culture and Thinking teach Chinese Language at the Norwegian Ministry of Foreign Affairs. Click and take a look at some of her Chinese Wisdoms interpretation!

To me these are example of how much you can learn from blogging, sharing and being curious about others – just like one of my sayings: Blogging and other Social Media break down cultural, religious and other barriers. That’s way I by this want to say: Happy New Year of the Snake from Norway!