The last day of my trip to Tromsø I went to the museum and found an interesting exhibition and some information about the Sami people. I captured it with my mobile phone and gladly share this special part of the native Norwegian population: 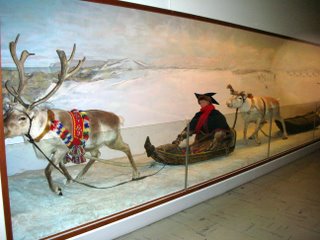 The Sami are traditionally hunters and fishermen that have long inhabited the northern region of Scandinavia. For more than six month of the year the ground is covered by snow and the Sami thus have needed a means of transportation that can be used in the winter time. Does anybody doubt that the original Santa comes from Norway and still uses reindeer to bring the Christmas presents all over the world? 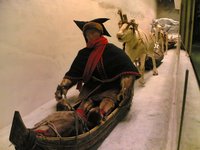 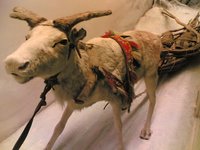 Skis have been used since prehistoric times (Norwegians are born with skis on their feet, remember!). The Sami have always used skis and the first Norwegians called them the ‘Ski Finns’. The nickname appears already in the early 6 century in the writing of a Greek historian. 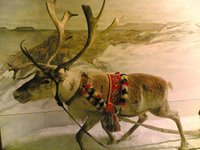 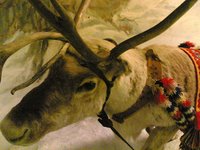 The first tame reindeer were probably used as decoys and pack animals during reindeer hunting. The north Norwegian landowner Ottar, writes that at the end of the 9 century decoy-reindeer were highly prized by the Sami. One can only assume that as reindeer herding developed, individual animals became more and more important in their daily work. During the winter they were used to pull sleighs and during the summer as pack animals. One reindeer could pull up to 150 kg over 50-60 km a day. Today the “motorsleigh” – the snowscooter – has taken over most of the work (see me “driving” one in the article below!). 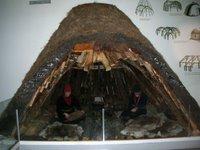 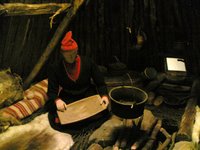 In the museum I also had the chance for a peek in their houses – ‘gamme’. Not much luxury, but still well furnished, practical and warm despite the arctic conditions. Here are some more information of the Sami from the Norwegian Ministry of Foreign Affairs. 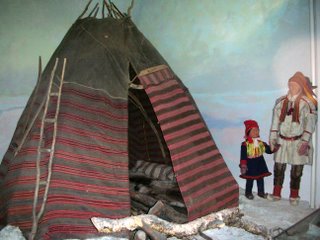 Sami Lavo (tent) – see the similarity to the American Indians?

So this is the end of my report from the trip to northern Norway and the Arctic. I want to thank every reader for visiting my blog and all you’re nice, interesting and thoughtful comments. If you like to read more, some of my resources has been Destination Tromsø. Some of you have said they wanted to go there. Please tell me in advance because I’ll gladly be you’re guide :-)
Now the Easter Holiday starts in Norway and I will keep you posted of course!

Update:
A norwegian Sami blogger have a great and very educative blogpost about the Sami. Go read yourself!

This will be the second last article about the northern part of Norway (I do hope you enjoy the others below!). As I always want to be on top, I went to the roof of Tromsø by a gondola. Of course I had my mobile phone with me to capture the exiting moments and share them with you: 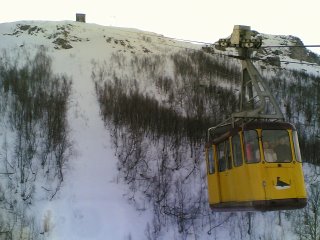 In just four minutes the cable car in Tromsø takes you up to “Storsteinen” 420 metres above sea level), where you can take pleasure in a fantastic view overlooking the town and surrounding mountains. At the “Fjellstua” restaurant, you can enjoy a cup of coffee, lunch or dinner, while delighting in the view. Fully-licensed bar. Outdoor café, kiosk and post box with its own stamp. 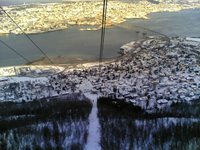 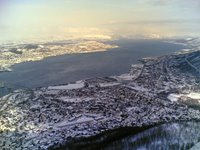 higher and higer – and – on the roof of Tromsø

As the gondola gets higher, the town gets smaller and the view more and more impressive and beautiful. It was a bit windy so we where swinging a bit from side to side, but that just increased the feeling of flying – free like a bird :-) 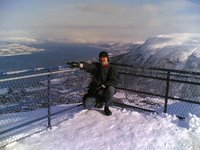 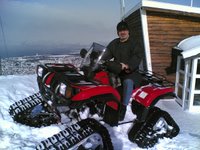 feeling on top of the world

This time I was together with some other delegates for The Norwegian Computer Society (their national assembly was the reason for my trip) and the where so kind taking pics of me for fun. Hope you like the view and bear with me for my craziness as I just had to sit on the belt tractor :-)
After this, there will be one more article about the Arctic and that would be about reindeer sleighs – so stay tuned and you will have a jolly good ride in a couple of days!

Let’s go on with my experiences in Tromsø last weekend:
Housed in a very distinctive building that represents ice flows that have been pressed up on land by the rough seas of the Arctic, you will discover Polaria, just five minutes walk from the centre of Tromsø. Polaria has an Arctic aquarium and interesting knowledge-based exhibits. We had our dinner there at Saturday evening and I had my Nokia mobile phone available of course. We started with a cocktail before the Polar Buffet with smoked salmon and seal, but I had to try the snow scooter first of course :-) 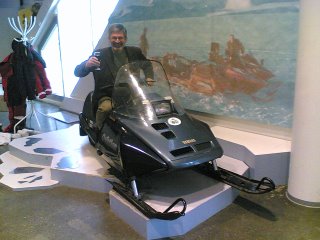 Polaria was established in 1997 on the initiative of The Department of the Environment, in order to spread knowledge and awareness of Arctic flora and fauna, climate and environmental consequences, to tourists and other visitors. 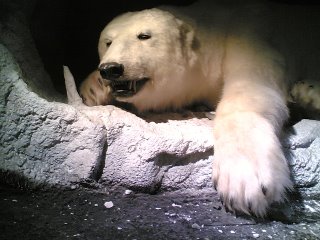 You can experience first hand some elements of Arctic nature – a snowstorm, a dozing polar bear, the tundra and the (Northern Lights). In the aquarium the main attraction is the bearded seals. The bearded seal is an arctic species, and they are very popular among children and adults alike, due to their quiet disposition and intelligent nature. One of the seals was sick the night we where there, so therefore they have emptied the aquarium. They did that to check the animal and gave it anti biotic and the next day we where told he was much better. 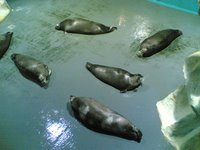 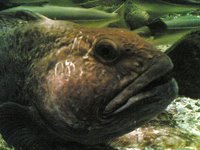 The bearded seals – and – The catfish

In the aquarium you can also get acquainted with the marine animals by touching them. You can also make your own waves, and study the maelstrom. I did not dare shake hands with the catfish in the picture above though :-)
From the Norwegian coast, up to the Barents Sea and towards, the ocean is filled with cold arctic waters. Most fishes have a preferred temperature in witch they thrive. Therefore the composition of species will change when you enter colder arctic waters.

Listen to this article

This is the third article about my trip to Tromsø last weekend. I must admit, I am fascinated by the nature, the landscape and the culture in the northern part of Norway. They are not famous for a warm climate, but the people are really outspoken, open-minded, warm and friendly. The gateway to the artic is wonderful and I am glad I had my Nokia mobile phone easily available to capture some of my experiences to share with you (click on them to enlarge!). 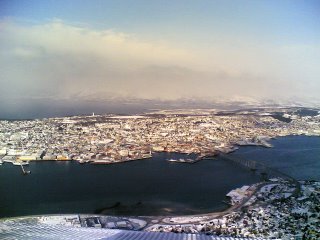 Tromsø is the largest city in the Nordic countries north of the Arctic Circle and is home to the world’s northernmost university, brewery and cathedral. The city lives on education, research, administration, fishing exports and satellite technology. The centre of the north has 62,000 residents and the Municipality of Tromsø covers an area of 2558 km². Around 50,000 people live in the centre of Tromsø, while the remainder is scattered throughout the whole municipality. 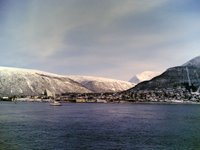 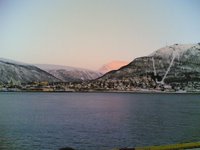 The main land – in the morning and in late afternoon

Tromsø was founded in 1794, although the first church was built here back in 1252. In the 1850s, Tromsø became the centre for Polar sea catches in the Arctic region, while in the early 1900s the city was the starting point for a host of expeditions to the Arctic and Antarctic regions, something that gave the city the nickname Gateway to the Arctic. 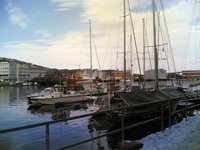 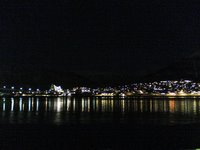 The harbour and the main land at night.
Notice the artic Cathedral!

In 1940, Tromsø was capital of the non-occupied Norway for a few weeks, and was the only city in Northern Norway to totally avoid war damage. In the years after 1960, Tromsø has experienced an exceptional growth in population, which is in part due to the establishment of institutions like the University of Tromsø and the Norwegian Polar Institute.
The last article will be about my exiting trip with the gondola and some of the wild life in the Artic, meaning: there will be more to come, so please come back soon!

I promised you to share some of my experiences in Tromsø, Norway. Here is a masterpiece by Jan Inge Hovig. Built in 1965 and reflecting North Norwegian nature, culture and faith, with a monumental stained glass window. 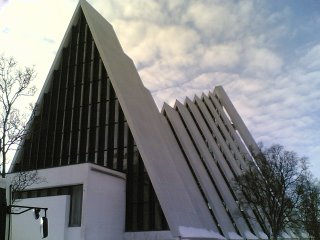 “The Arctic Cathedral” is a name often given, but it’s actually an ordinary Lutheran church. Perhaps because it has become a major tourist attraction in Tromsø. The large, angular formation and the light colour can easily be associated with an iceberg. The frontal part of the building is 35 metres high. Along its length there are concrete columns that reach all the way to the ground. These angled columns are covered with a cladding of lacquered aluminium plates. 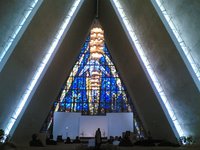 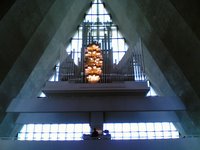 The interior lighting is positioned such that it lights the outside of these plates as well as the inside of the church, giving a special effect. The ground area of the main church hall is 900 square metres, with seating for 720 people. The lower floor, or cellar, has an area of 1020 square metres. The organ has 22 voices and 124 keys (electro pneumatic wind chest and register). It is situated by the west gallery – the picture at the right hand side. 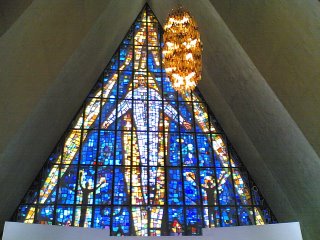 The stained glass window was unveiled 25 June 1972. The window is 23 metres high and covers an area of 140 square metres. The shape is triangular and covers the entire east wall. 11 tons of glass was used to finish the window. Each glass element comprises of 86 rectangular sections that form a complete whole. The man behind this work of art is Viktor Sparre. He envisaged Tromsdalen church as a “building without a soul” unless the proclamation of Christ was clearly brought through in the construction of the church itself.
I use my Nokia mobile phone to capture my experiences – please click on the pics to enlarge. And there will be more in the days to come :-)